I love these people!

Dang! Am I a pitiful excuse for a blogger, or who? I can't believe my last post was a month ago. Where did that 1/12th of the year go?
I should probably tell you that I've been in a coma since Thanksgiving and therefore lacked the motor skills required to type while I teetered perilously close to landing in the big blogspot in the sky.
But that would be a rather HUGE lie.

Truth is, I have spent the last 30 days meditating furiously to the mantra
~'I will not stress this year'~.

Furious meditation is kind of an oxymoron, huh?
Whatev. So although I did not stress, I didn't do some other things either.
Like blog.
Stressless December wasn't a total success but it was close.
I ended up taking an emergency vacation day last Tuesday to finish up my shopping and get some baking done.
Lefse, anyone?

But even as we were finally getting around to decorating sugar cookies on Christmas Eve afternoon, I was calm.... although you might not know it from the erratic icing on my gingerbread men, some of which were NOT intended to be that anatomically correct.
For extra bonus points I should mention that my in-laws had already been in residence for FOUR days at that point.
~'I will not stress this year'~
~'I will not stress this year'~

True, the dog didn't get a Christmas bath.
And only the really bad areas of my carpet got shampooed.
Oh, and a shovel was never once put to the driveway after the last storm.
And no one died.
Did you even know that if you drive over the snow enough times it will come to resemble a cleared, albeit slightly lumpy driveway.
That's assuming you have all wheel drive and/or some serious tread on your tires.
And a good run at it.
Watch out for the big, black car turds, though.
This is kind of off topic but do you know what's fun about living on a hill?
Watching people with bald tires try to make it up the hill in a snowstorm.
And fail.
And instead of giving up and backing down the hill they just keep spinning and spinning until smoke starts rising or they slide sideways into the gutter where they have to sit until the tow truck comes.
It gives me a warm fuzzy feeling to know that they have been temporarily taken out of the traffic mayhem game.
Sorry, I digress.
Anyway, I wanted you all to know that I am alive and suffering from nothing but bad time economy.
I do have high hopes for the new year, though.
Yep, blogging and exercising will be my top priorities.
Hahahahaha. 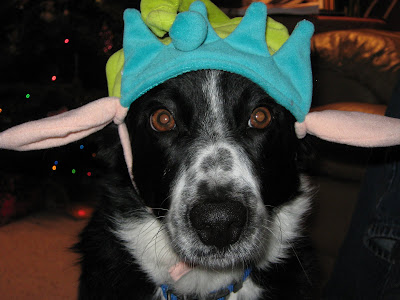 Of course there is always time to take pictures of Santa's little helper.
Merry Holidays, everyone!!!


Okay, so I know receiving is not the spirit of the season but I gotta know: What was your best present???

Good wishes to you. I hope this next year will bring you happiness and harmony.

welcome back to bloggy land!

my best gift was that boy1 surprised us by flying home to spend Christmas with us. we weren't suppose to see him until June.

what was your best gift?

Considering how crazy American Christmases are, by their very nature, I think you did great!

Hope the upcoming year is equally kind to you.

Welcome back. I had two best gifts this year. First, we found out that we are having a grandson in April and I got a new camera to take lots of pictures of the grandkids.

Happy Holidays and have a great 2010!
My best gift was having the family together to celebrate the holiday. Because of the snow storm I wasn't sure that would happen, but everyone managed to make it

THIS was my best gift! (snicker, snicker) The White Christmas of course would be the best gift for this native Texan!

Here's to a stress free New Year for both of us. I'll drink to that!

So glad to hear you had a stressfree Christmas! Before the end of the decade, I finally scored me some UGG boots. Love 'em, love 'em, love 'em, even if I am one of that LAST people on earth to get them! Happy New Year!!

Best Present : The realization that Ill be able to deliberately CHOOSE to work next season ON PURPOSE and let the Hubs run to all the familial horrorfests, I mean celebrations. I mean, I'll be Low-man on the Totem and all that, so thems the breaks, right??? Muhahahahahaha!

I thought you were SUPPOSED to decorate Christmas cookies a few minutes before you put them on a plate to leave for Santa. So they're fresh!

I've been in a "functioning coma" myself for a few months. Bleah.

My favorite present ... having all of my children and grandchildren in one place. This may sound a little sick and twisted but watching my three year old grandchildren duke it out on Wii Boxing was way too much fun. Heesterical!!

Hey Jane! Good to see ya'! I haven't been around much these past few months either. Too much bad stuff going on. I've been trying to hide in a corner. Anyway, new year new beginnings and lots of refusal to let 2010 even come close to resembling 2009!

Hey Jane! Miss Pepper Ann is sure looking good as an elf!

Glad you had a good Christmas...I say this noting that you either let your inlaws live, or were smart enough not to get caught doing anything wrong...ya know, since you've posted, and aren't in jail.

Why didn't you tell me you were blogging again?????

Glad to see you back! Now don't disappear on us again.
I do like the idea of a stressless December though.

Well, at least you made cookies. I didn't get that far this year but I ate my fair share that co-workers left in the copy room. :) Here's to the New Year!

You give your dog a Christmas bath?? Very cool! I do that with the kids!! Hope to hear more from you soon! Missing you!

Glad you had good holidays, even if the dog didn't get his bath.

Remember me? Sorry I haven't been around much (at all?) in so long but for the past year and a half I've been in and out of ERs, ICUs and the hospital in general. I lost a few body parts and lots of weight but I'm on the mend now. It was touch and go for awhile so I wasn't able to comment much but I did do a bit of posting. I'm still at the same old address, ruserious0947.spaces.live.com. So, time to update my space and get back into it. I may update my blogger space too.

My favorite Christmas gift? Waking up on Christmas morning to be greeted with a dose of Demerol!! There's alot to be said for spending the holidays in ICU.

I miss you Jane

Is this really your latest post? Because I enjoyed it, and this is the latest one I found - I was kind of hoping I found another blog to dip into when I needed some good writing to cheer me up.

The Lady in Pearls said...

It's like Christmas in September! How in the world did I miss this post????????? Ok, it's been almost 9 months. Time to let us know that you are alive and Santa's little helper hasn't buried you in the backyard for posting all of those crazy a$$ hat pictures!

Oh and love the new look. I turned mine pink today! I'm talented like that!

I love the picture of Santa's Helper!

I'm a little late to the party.
So are you going to get back to it or what? My daughter sent me on over - insisted that in some alternate universe we might actually be the same person, or at least adopted siblings.

IF you ever get back to the whole blogging thing I'll have to stop by again. Otherwise I'm sure the server will just bounce this back, or it'll go meet the big web hole in the sky.
Wow. I think Bill Gates just got a chill.

I'm always here to support you.

Hello Jane, I hope you are doing well.

Jane!
My full name is really Dammit Jane! I'm a button pusher, bean counter, mom, wife, pet butler and mistress of the half-finished. I'm NOT a writer or photographer. But I do blather on and regularly slap up pics from my dummy-proof camera. Mostly, this blog is how I keep from stapling everyone in my life together and burying them under the potting shed.